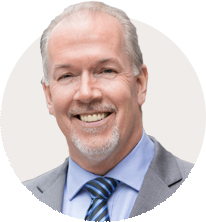 John Horgan, was elected MLA for the new riding of Langford-Juan de Fuca in October 2020. He was first elected to the Legislature in 2005 as MLA for Juan de Fuca, and has been re-elected three times. He became leader of the BCNDP in 2014 and Premier of British Columbia in 2017. He also serves as Chair of the Planning and Priorities Committee and the Cabinet Working Group on COVID.

A husband and father, John and his wife Ellie have two grown sons. John and his siblings were raised in Saanich by his mother, after his father passed away when he was very young. John grew up playing sports and was a natural leader at school, on the basketball court and in the lacrosse box.

As a young man, John worked in a BC mill and in a joinery. He earned his Bachelor’s and Master’s Degrees at Trent University in Ontario and Sydney University in Australia. A meeting with Tommy Douglas sparked his interest in social democracy and he went on to work for Members of Parliament in Ottawa.

In 2001 Horgan started a management and research consulting company helping both private and public sector organizations.

A cancer survivor, he is a passionate advocate for health care, public schools and community services for families.

John Horgan is working for opportunity and security for everyday families in BC. He is fighting for services you can count on, good family-supporting jobs in a sustainable economy, and making life more affordable.

VICTORIA – Today Premier John Horgan wrote a letter to Prime Minister Justin Trudeau, asking him to continue to encourage the Indian Government to seek a peaceful solution on the farmers’ legislation. “I write to you to share the deep …

While speaking with reporters today, Premier John Horgan addressed problems with long-term seniors care left behind by the BC Liberals: “When we were sworn in as a government, the Seniors Advocate, Isobel Mackenzie, had just issued a report that showed that the vast …

VICTORIA – New Democrat MLAs say that people in Greater Victoria will have access to new community centres, and more arts and recreation opportunities thanks to a new joint provincial-federal investment of over $18 million for eight projects. “By investing …

Victoria-Swan Lake
Minister of Transportation and Infrastructure
Find Your MLA