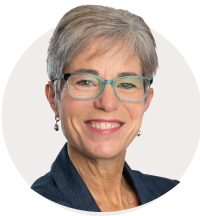 Selina Robinson was elected as the MLA for Coquitlam-Maillardville in 2013, and re-elected in 2017 and 2020. She is the Minister of Post Secondary Education and Future Skills and was previously Minister of Finance. She also serves as a member of the Planning and Priorities Committee and the Cabinet Committee on Economy.

Born and raised in the suburbs of Montreal, Selina has been actively engaged in the Coquitlam community since moving there nearly 20 years ago.

As a former city councilor, Selina advocated for the rights of taxpayers, fought to protect the health of children and families by introducing a local ban on cosmetic pesticides and worked to improve access for people with disabilities as chair of the Coquitlam Universal Access-Ability Advisory Committee. Prior to being elected, Selina had a home-based family therapy practice, was the Director of Development for SHARE Family and Community Services and was a Counselling Instructor and Program Developer at the University of British Columbia’s Life and Learning Centre and Vancouver Community College. Selina is also a member of the Coquitlam Terry Fox Run organizing committee and the Tri-Cities Chamber of Commerce Membership Committee.

Selina lives with her husband Dan in the Ranch Park neighbourhood of Coquitlam-Maillardville where they raised their now adult children, Aaron and Leya.

COQUITLAM – New Democrat Selina Robinson says new support from the BC NDP government will help tour bus companies in Coquitlam-Maillardville recover from the impact of the COVID-19 pandemic, attract visitors and provide local jobs. “People and businesses within the tourism …

COQUITLAM – New Democrat MLAs Rick Glumac and Selina Robinson are welcoming $202,500 in funding for seven not-for-profit organizations in the Tri-Cities. The organizations, which provide environmental and public safety services, are receiving funds through the Community Gaming Grants program. The recipients …

Langley
Minister of State for Workforce Development
Find Your MLA